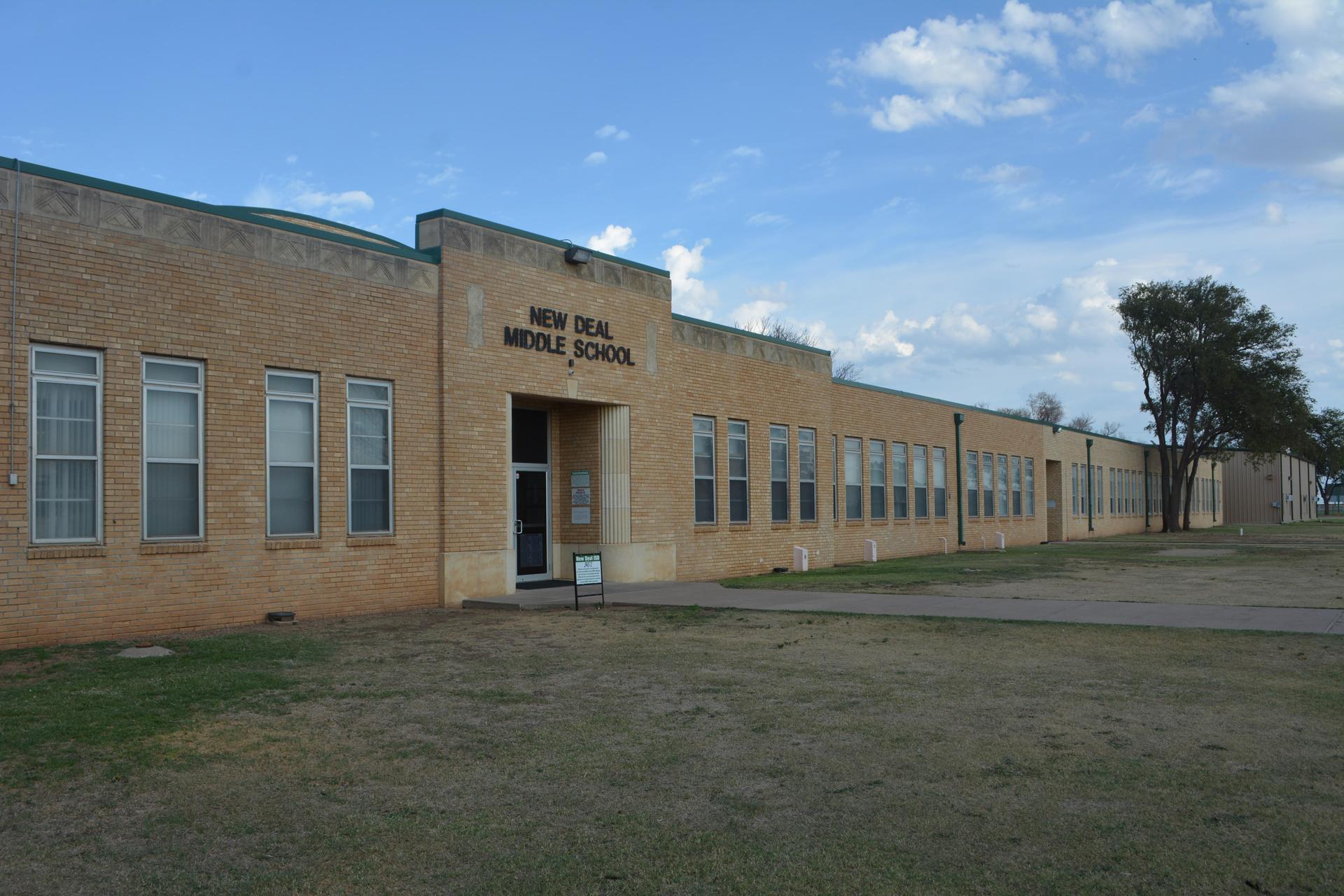 By Shelby Burkhead
On Tuesday, November 12, the New Deal Middle School One-Act Play competed at Post auditorium to bring home a District Title. The Middle School cast and crew had been working on their play Riki Tiki Tavi since the beginning of the school year. 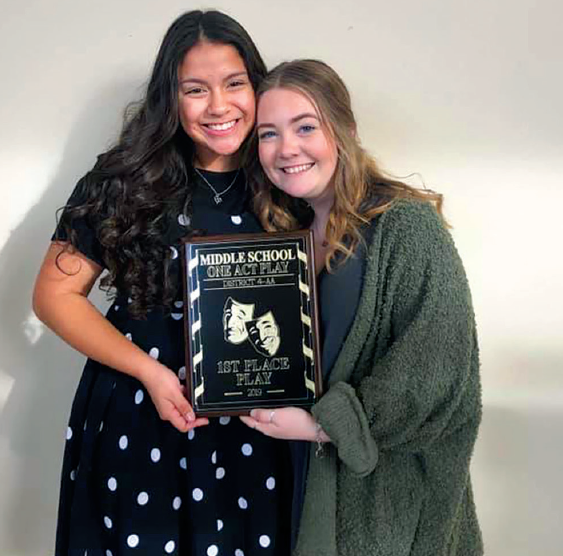 When Macie Burkhead was asked how she was feeling before they went on stage she said, “I was nervous, and I was afraid that I was going to mess up my lines and end up saying somebody else’s.”
The NDMS One-Act Play won seven individual awards. The winners of Honorable Mention were 7th grader Kaylie McLaurin, 6th grader Cheyenne Casares, and 8th grader Brandon Orr. The actors that received All-Star Cast were 6th grader Kylie Jones and 8th grader Bell Bankston. There were only two awards left, which included the Best Performers, which normally will go to two different schools. However, the judge was so impressed with these two actresses that he gave these to the actors from same school. Receiving these were 6th grader Macie Burkhead and 8th grader Jessica Montez.
The middle school director Tommy Burkhead said, “I wasn’t surprised that both of these these 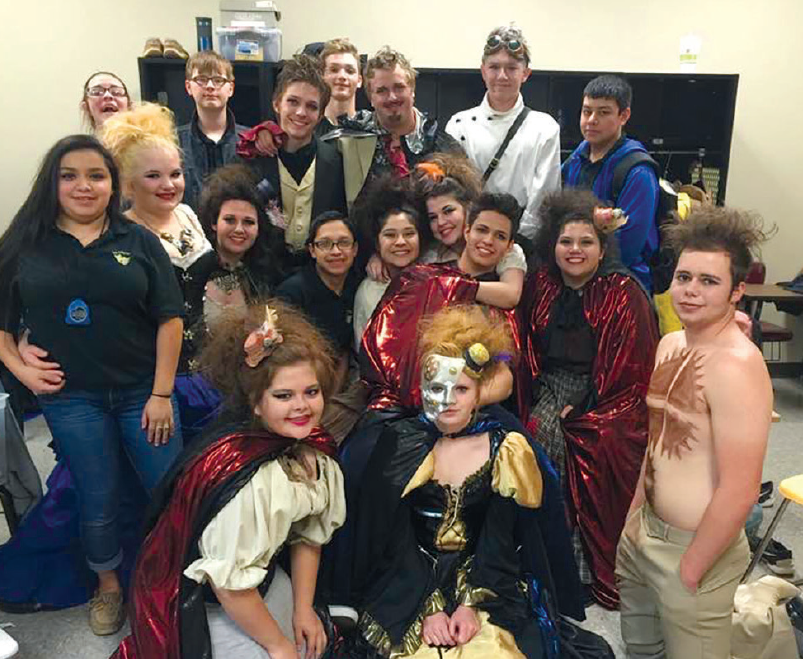 actresses won best performers as they both were very deserving of it. I was, however, surprised that the judge gave it to the same school.”

When asked how she felt when they got called for the district title, Bell Bankston said, “I was excited because it was our first-time beating Post in a long time; I was so happy that we pulled it off.”
The New Deal Middle School had a great year and ended with a bang! They would like to thank all their supporters and all the people that helped them get through a crazy season, especially student directors Jade Braziel and Anjelica Pantoja, who spent many hours volunteering to take the reigns during Mr. B’s absence.

Last week Mrs. Callie Carver’s 7th grade class, the students are dissecting frogs as part of learning about the body systems. The students have been learning all about the digestive system and all the inside organs. Once students were paired up in groups of two, they started dissecting. While they were dissecting, the students were able to get a closer look at the insides. The students were able to see if the frog were male or female based on whether it had eggs inside or not. After looking through and finding everything they needed according to their instructions, some groups decided to take their dissections to the next step. Some groups even asked if they could cut the heads off and remove various body parts. One group even removed their specimen’s tounge! Seventh grader Gunner Stanton said, “It was really fun and helped me to learn how all the insides are connected.” 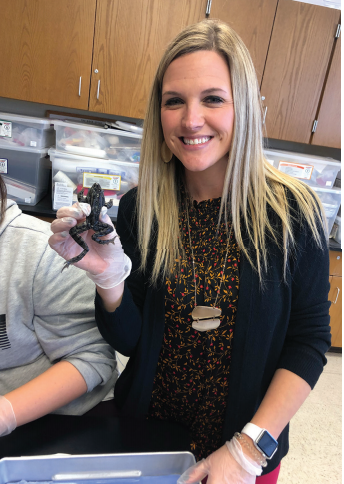 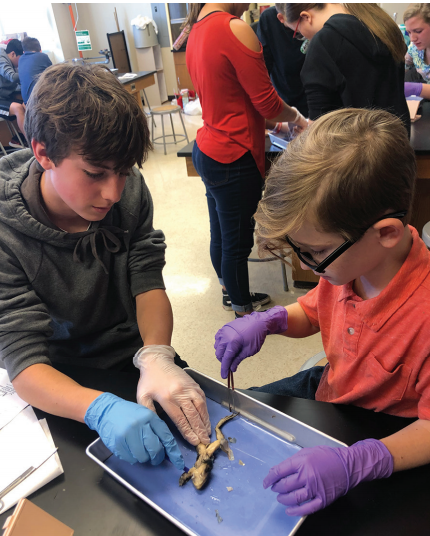 The Middle School One-Act had a community performance on November 5th at New Deal. Angelica Pantoja, assistant director, said, “I feel really good about our performance; we also spoke to a lady about how we did, and she said it was the best performance she saw all day!” She also told the directors that she was surprised how loud the actors were during the performance. Student actors felt like they had a really good performance. Eighth grader Bell Bankston, said, “I think we are going to do very good at competition. I am very confident in everyone that is involved. We have been working so hard and I hope it is going to pay off at our up coming competition.” This is the last year for some of these students before they move on to high school. They are very confident in their play this year. When asked how she felt about her first performance of the year Jessica Montez, 8th grader, said, “I am very confident in our play this year. Now we just have to practice a little more before we go to competition.” These students have been working incredibly hard for their competition. The middle school students are also very thankful for the high school students that are helping them try to achieve their goal of winning.