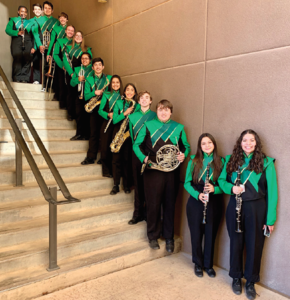 New Deal Lion Pride Band students practice their scales and etudes...
By Karleigh Robinson
ATSSB (Association of Texas Small School Bands) Regions, or “All Regions”, is an opportunity for small school band students to showcase their musical talents. New Deal Lion Pride Band students began practicing their etudes and scales after their marching season ended. Sophomore baritone player Mahalei Romero says, “The music is made to challenge us as young musicians. All Regions is very competitive and just making the band is a great privilege.”
The students traveled to Abernathy, Texas on Thursday, January 16th to try out for the band. They played cuts of two etudes, a major scale and a chromatic scale. “I think tryouts went pretty well this year,” says sophomore clarinet player Jadyn Anderson, “We have had more people wanting to try out this year, which means more opportunities for the students.”
This opportunity comes around every year for band students all over Texas. All Regions allows band students to have experience outside of their home campus and allows them to meet other talented band students just like them. Sophomore Clarinet player Erin Montez says, “I think it's a good opportunity for students to improve their skills outside of regular high school band.”
Students who make the band will be split into 2 different groups, Symphonic and Concert. They will then be given more music to learn and to play for the families and friends of the students in a concert. Congratulations to all of these hard-working students!