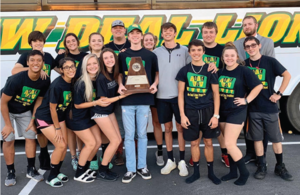 October 19, the Lion Pride Band performed in the UIL marching contest at Lowery field, receiving a Division 1 Rating...
By Kaylee Williams
On October 19, the High School band performed in their UIL marching contest at Lowery field. The band performed their show music called “Sock Hop Classics.” The music contained pieces from: Rock Around the Clock, Mr. Sandman, and At the Hop.
“Band was really exciting this year,” said sophomore Reymie Monasterio. “While marching onto the field I was very nervous, but as we started I calmed down and just focused on playing and marching. I’m so glad all the hard work we have done has paid off,” she added.
The band received a Division I rating, getting all ones from the judges. “Our clarinet section was ready to march what we had been practicing since August,” said Briana Martinez. “As we marched off the field I felt a little nervous about our performance, but thankfully we did well and got a First Division!”
“I am glad we got the highest ratings possible from all the judges,” said Ghenevieve Vasquez. “I look forward to playing concert music and performing for others.” Band directors Mr. Speer and Mrs. Brewer were given many compliments for the band’s performance. The students were so proud of each other, and the seniors were happy that their last performance was practically perfect.