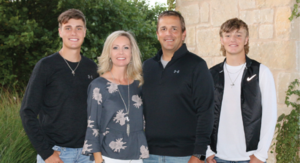 Beginning his 20th year in
education, Mr. Matt Reed is
excited about the 2019-2020
school year...
Beginning his 20th year in education, Mr. Matt Reed is excited about the 2019-2020 school year. As of June 1st,
2019, Mr. Reed began in his role as Superintendent of Schools for New Deal ISD. Mr. Reed is no stranger to the
district, though. He has served as the New Deal Middle and New Deal High School principal for a total of 13 years at New Deal. A graduate of Levelland High School, Mr. Reed was active in football, basketball, power lifting, track and FFA during high school. After graduating high school he attended South Plains College, and he received his Bachelor’s degree from Texas Tech University. He began his teaching career at Levelland Junior High School teaching science and coaching. While teaching at Levelland Junior High, he attended Lubbock Christian University to obtain his Master’s degree in Educational Leadership. After receiving his Master’s degree, he became Assistant Principal at Levelland High School where he served for five years.
In 2002 Mr. Reed earned his Superintendent certification from Texas Tech University. Mr. Reed and his family
moved to New Deal during the summer of 2006 when he became the principal at New Deal Middle School. He
later became the NDHS principal, and then served as the Assistant Superintendent as well. “The administration and school board are supportive and believe in doing the very best for the students and the community of New Deal ISD,” Mr. Reed said. Mr. Reed and his wife, Christi, have two boy ages 18 and 16. Layton is a 2019 graduate of New Deal High School and is a sophomore at Texas Tech University where he is majoring in Business Finance. Kyler is currently a junior at New Deal High School. In his free time, Mr. Reed spends time with his family, attends sporting events, and is involved in church activities. Mrs. Reed is a children’s pastor, and has a Master’s degree from the University of North Texas. Mr. Reed says that working at New Deal ISD has been
a blessing for him and his family. “New Deal ISD is a great place to work and go to school!” he added. We are excited to have Mr. Matt Reed as the New Deal Independent School District Superintendent!